Datolite vein in diabase matrix. The vein has vugs filled with water-clear crystals. The appearance of the datolite is likely to be confused with other minerals such as calcite or quartz because the stunted structure of the crystals (of calcite) and a glassy, irregular, conchoidal fracture (of quartz). However, hardness, vitreous luster, and odd-shaped faces placed at random (as described in Bernstein, 1976) are consistent with datolite.

Individual and radiating stellerite crystals on the side of diabase. Note the varying shades of beige.

Crystals of Galena are present in the prehnite of this example. A 1mm galena crystal (Figure 14) is perched on top of the prehnite and is accompanied by white crystals of chabazite. 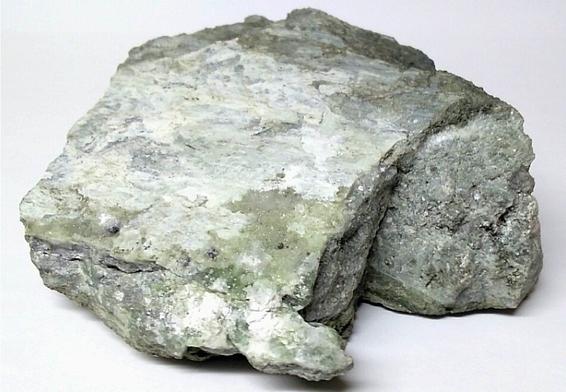 We arrived at the quarry around 7:30am. Our quarry guide gave a safety briefing around 7:45am. We signed a liability waiver and role call sheet. Around 8am, we followed the quarry guide as a group into the first level of the quarry. We parked in the south end of the quarry along the berns and high wall. The level from one side to the other was four car-lengths in width. Upon getting out of the car, I went to the adjacent burms and found several samples of Prehnite with Stilbite in small ¼” to ½” vugs and seams (Figures 9, 10). When I walked to the burms along the high wall, I found what other club members missed, including laumontite with chalcopyrite in diabase (Figure 11), druzy Epidote in Calcite and aplite (Figure 12, 13), Galena on prehnite with chabazite (Figure 14, 15), datolite in diabase (Figure 16, 17), byssolite in individual plagioclase and pyroxene crystals on a prehnite vug containing stilbite crystals (Figure 18, 19, 20), et al. I walked toward the southeast edge of the quarry and found a small area of red hued rock. One piece (Figure 21, 22) contains chalcopyrite grains. From here, I walked across to burms closer to the interior and found pink and white dolomite and calcite (Figure 23). I walked to the burms further east on both sides of the roadway and saw they were aggregate that left the quarry, but was later returned. In addition to the quarried rock, these burms also contained construction material such as concrete, bricks, mud, and trash. The aggregate grains varied in size from ½” to 2’ in diameter and had very little mineralization. We drove to the entrance to the lower levels and parked. We could not drive further as the road was closed due to erosion. I walked down the road. In the beginning, most of the material was picked over and/or weathered. I started to find interesting material after 15 minutes of walking. Most of the interesting material was found about 10ft above the road on the burms. Fred Paras found an excellent specimen of prehnite about a foot in diameter. Afterward, he continued to find interesting material. I found a partially broken boulder with a seam running down the center. I was able to extract a section of the seam in two pieces that had already broken (Figure 24, 25, 26, 27, 28, 29). The seam contained stilbite, calcite, interestingly shaped apophyllite, and druzy chlorite. I walked further down the road and started to find boulders with coatings of stellerite crystals (Figure 33). Many of the coatings were heavily damaged from tumbling. I initially gathered several pieces, but had to them behind because it was time for use to leave the quarry, so I was only able to bring back one piece. We left the quarry around 12 noon. 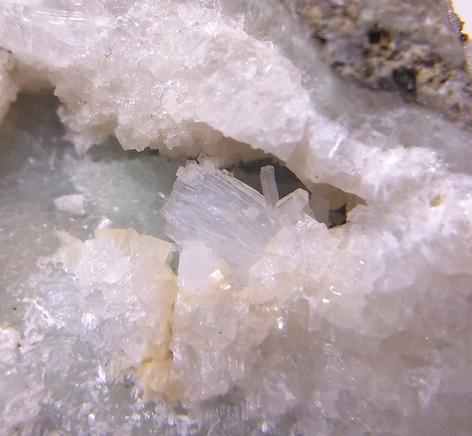 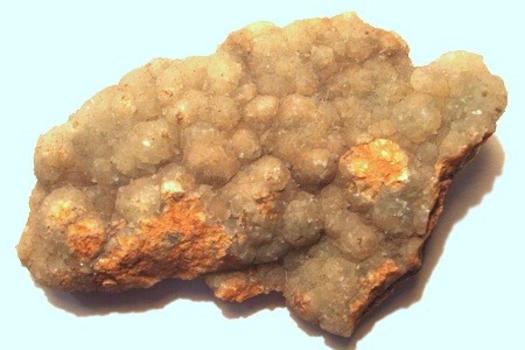 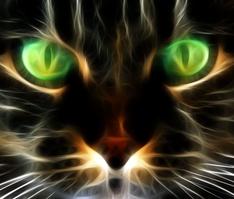 Hydroxyapophyllite, Stilbite, Chabazite and Calcite on Diabase matrix. Crystals of calcite cover the top surface on this example. They look like salt coating the matrix and their crystal structure is only visible under a loop. The apophyllite crystals are slightly opaque, lighter, with filleted corners. Larger calcite crystals, which are beige in color, sit among the apophyllite and micro-calcite. These calcite crystals are fractured and broken as a result of splitting the miarolitic cavity that contained them. A sample placed in vinegar (Figure 8) dissolved the clear and beige calcite crystals rapidly. This revealed a layer of bladed stilbite crystals. While the crystals of stilbite remained clear, some of the crystals showed signs of etching, or were partially formed. The presence of apophyllite became more apparent after the acid. The crystals turned white at the end and were partially dissolved into a pointed shape. The white at the tip of the crystals shifted to clear at the base with the opacity change occurring in stepped zones rather than a gradual shift. The acid revealed white rhombohedral crystals, similar in appearance to the calcite, which was suspected to be chabazite. The chabazite crystals did not show evidence of etching. 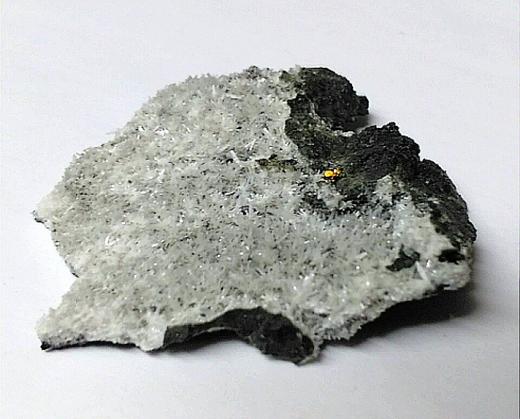 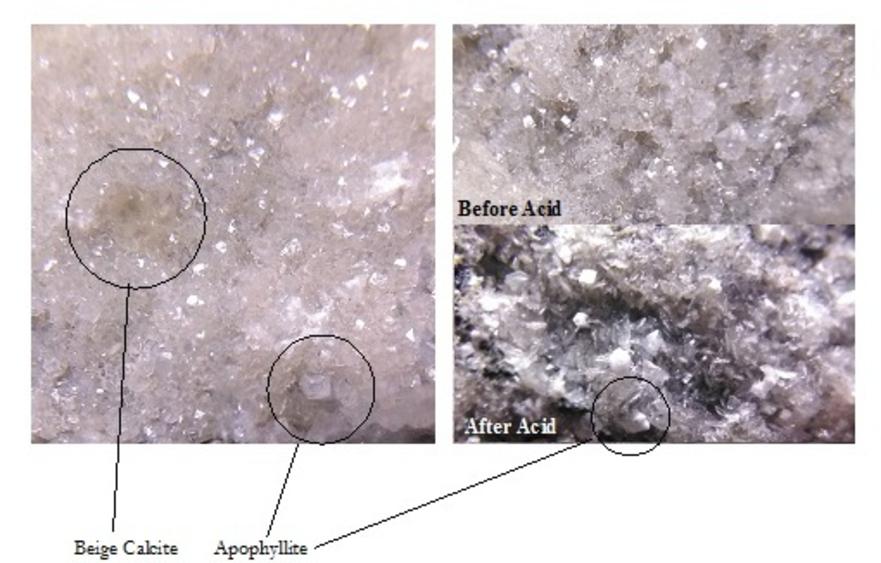 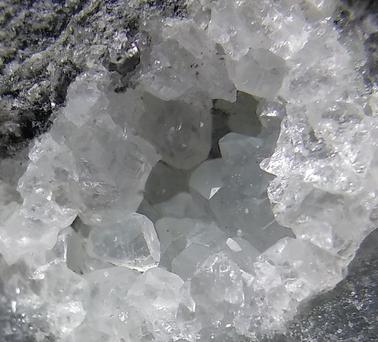 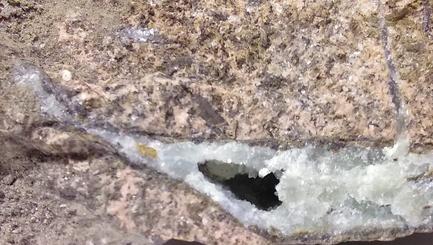 Example of material collected with prehnite lined cavities often containing micro-crystals of Stilbite and/or apophyllite. Figure 10 is of the inside of the vug pictured right (Figure 9) after being broken apart. Coarse-grained botryoidal clusters of prehnite crystals fill the cavity with small, transparent, and bladed stilbite crystals. 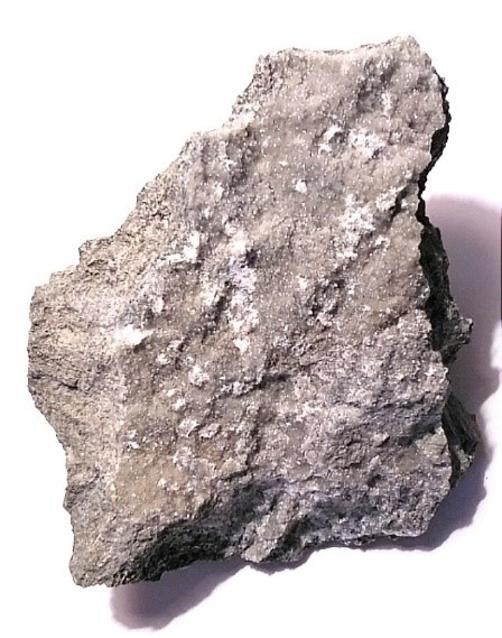 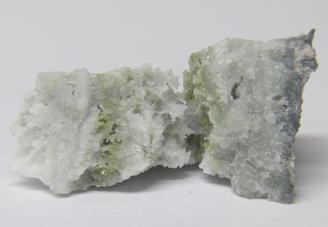 Stellerite on diabase matrix. Unlike figure 2, these crystals are well formed and easy to identify under a loop. They coat the matrix in masses and as separate crystals. The crystals coat both the front and rear sides of the matrix.

Balls Bluff Siltstone: It is assigned to the Culpeper Group. It constitutes the bulk of the Upper Triassic rocks in the central Culpeper and Barboursville basins and contains the redefined Leesburg Member in the northwestern Culpeper basin. It consists of grayish and dusky-red calcareous siltstone with thin layers of gray limestone, dolomite, and fossiliferous abd polyniferous gray to black mudstone and greenish-gray shale. Gradationally overlies the Manassas Sandstone; gradationally underlies the Catharpin Creek Formation on the west side of the Culpeper basin and the Tibbstown Formation in the Barboursville basin. Thickness ranges from 260-5500ft (80-1690m). Age is late Carnian to late Norian based on polynoflora. Freshwater invertebrates, fish teeth and scales, and dinosaur tracks and bones are present locally. (2)

Stilbite with Calcite on Prehnite in diabase matrix. The stilbite crystals in this example are elongated with a flat termination. They are surrounded by small beige calcite rhombohedral crystals. The prehnite is a microcrystalline coating on the diabase that provides a pale green backdrop for the stilbite and calcite. 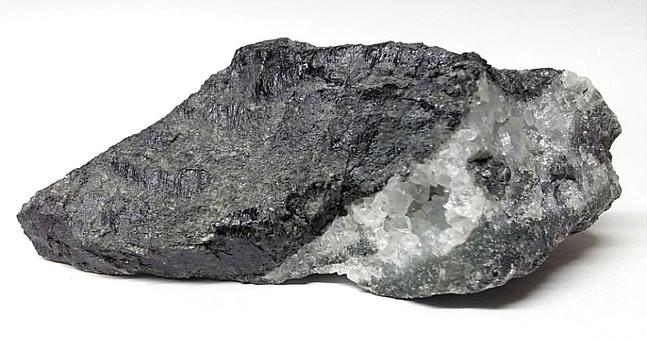 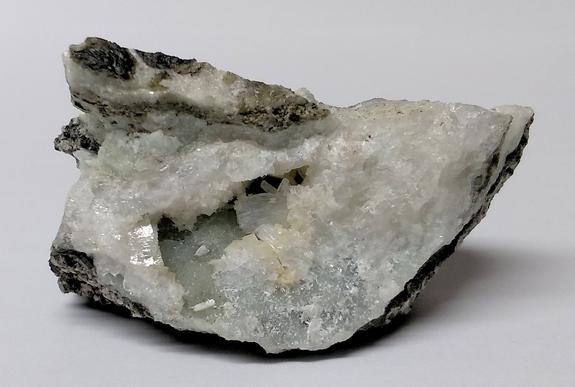 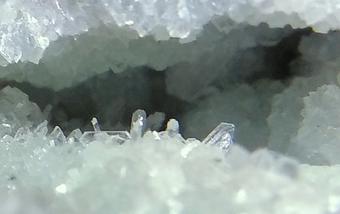 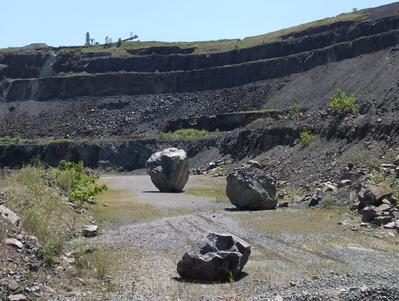 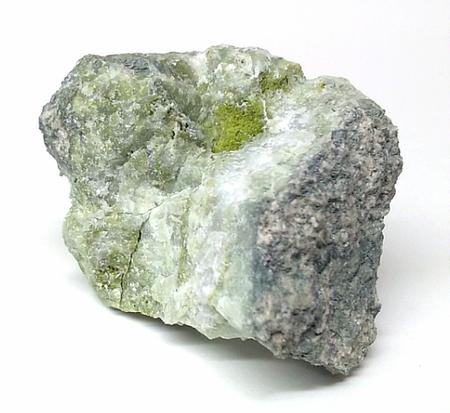 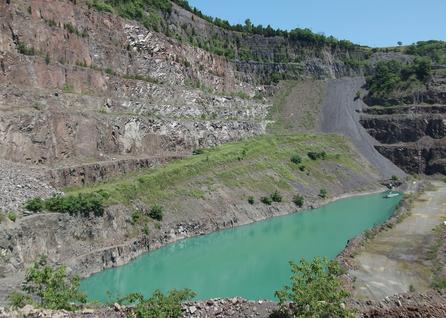 Radiating Laumontite with Chalcopyrite in diabase matrix. This piece is from a larger rock containing additional cavities filled with laumontite, prehnite, stilbite, calcite, et al. The entire matrix is chalcopyrite bearing. In this example, the laumontite is the only mineral present in this vein.
Ref # 18090

Micro Epidote crystals in miarolitic cavities within a vein of Calcite and Aplite (feldspar and quartz). A sample dissolved in acid (Figure 13) showed the white material to be approximately 30% Calcite with the remaining percent consisting of Albite and Quartz. The Epidote is also present as grains within the vein giving a green hue. 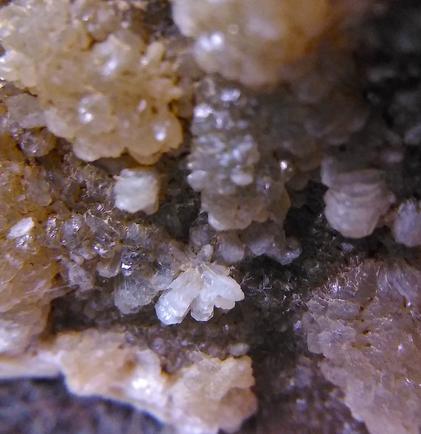 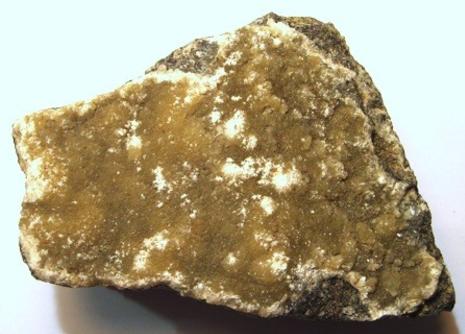 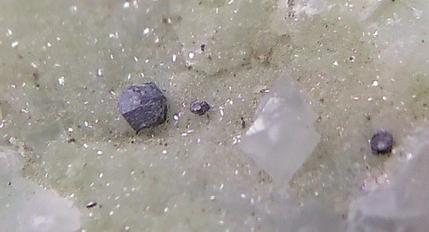 Stellerite in a Semi-botryoidal mass. This came from the side of a boulder approximately 3’ in diameter. The entire side was coated with Stellerite formed in this manner. Individual crystals are not readily visible. Rather, the crystal terminations are flattened and adjoined to the surrounding crystals.

Arrived around 7:30am at the quarry office parking lot. Signed liability waivers and sign in sheet then received safety briefing. Drove into quarry at 8am. Parked at highest level and searched the burms for zeolites. Finding specimens was difficult. Richard Hoff found a bowtie spray of stilbite on diabase. Fred Paras found a vug of prehnite. I found a small specimen of prehnite with stilbite and calcite (Figures 1, 2). We drove further down into the quarry. Richard Hoff and I found a boulder with one side completely covered with stellerite. I collected a small piece that had fallen off (Figure 3). I also found a larger piece with distinct stellerite crystals coating both sides of a brownish diabase matrix (Figures 4, 5). A member from one of the other clubs found a specimen of prehnite and stilbite with ¼” cube of apophyllite on prehinte and stilbite in diabase. Near the end of the trip, I found a 1’ wide chunk of diabase with a crystalline vein running through it. I later broke it open to reveal faces covered with micro apophyllite crystals and beige to clear calcite (Figures 6, 7, 8). We left around 12 noon.